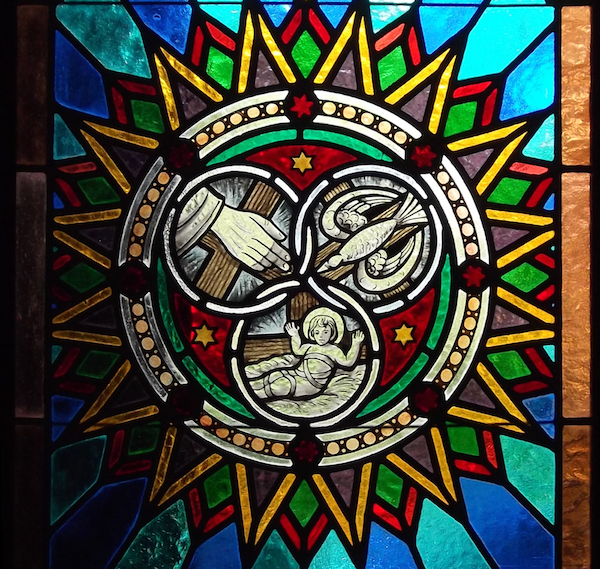 Let’s talk a little bit about this famous doctrine of the Trinity that we all know we should believe, yet have a hard time grasping.

The Christians of Bible times worshiped Jesus as their divine Lord. They agreed with Thomas when he encountered the risen Christ and exclaimed, “My Lord and my God!” (John 20:28) Jesus himself made the kinds of claims only a divine person can make, and his followers accepted his testimony that he is “one with the Father.” (John 10:30) But if you think about it, this is a hard thing to accept in a Jewish context. Remember what Deuteronomy 6:4 had said? “Hear O Israel: The LORD our God, the LORD is one.” The first Christians lived with a certain level of tension. They worshiped the Heavenly Father and Jesus Christ as God, yet they claimed to be monotheists. They didn’t try to figure out how both could be true at once.

Soon, however, people in the Roman Empire began to address this problem. They didn’t always get it right, and we call the erroneous views that cropped up, “heresies.” One heretical view taught that Jesus was simply a different manifestation of the same God who was previously known as the Father. In other words, God the Father now reveals himself as God the Son, but they’re actually the same guy. You can see how this concept, called “modalism” by theologians today, preserves the “oneness” of God. However, we must ask with skepticism in our voices: Is Jesus Christ just God the Father in a different outfit? No, that can’t be right. The early church fathers scrapped the modalistic idea as quickly as it popped up.

In the year 318 AD in Egypt, the senior pastor of the church at Alexandria held the view that Christ is eternal because he shares the same divine existence as the Father. However, one of the assistant pastors in Alexandria, named Arius, disagreed. To him, this smacked of modalism: it made Christ and the Father into the same being. Arius confronted his pastor (or bishop) and said Christ cannot be eternal. Only the Father is eternal, argued Arius. Therefore, Christ must have been created by God at a point in time. Arius claimed, “God existed when Christ did not.” You can see immediately this is just plain wrong. Today we call it the Arian heresy. But it made sense to a lot of people in ancient times. They viewed the Father as eternal, and said he created Christ as his helper.

The Arian heresy spread and became a huge divisive issue. The ancient church needed to define its views on the matter, so a council was called in 325 AD at a town called Nicaea. (It’s pronounced “Ny-SEE-uh, and today it’s known as Iznik, Turkey.) At the Council of Nicaea, the church rejected Arius’s view. The early church fathers defined the important Trinitarian terms of “person” and “substance,” which are the same terms evangelical Christians consider orthodox today. I teach this doctrine every semester in my theology class at Moody. The view held in the “Nicene Creed” produced by the council is that Christ and the Father have the “same substance.” In Greek, the term is homoousios, and sometimes you see that important word in books about the Trinity.

But if we say the Father and Son have the same substance – that they are both eternal and neither is created by the other – have we slipped into modalism? In other words, have we made God the Father and God the Son into the same being? Absolutely not. The theology of Nicaea uses the term “person” to distinguish them. God the Father is one Person, and God the Son is another. They share the same substance, but not the same personhood. For example, think of Beth, Melissa, and Amanda. They each share the substance of being a woman, yet each is distinct as a person. So it is with the Trinity: the shared substance is divine, but the persons are distinct.

In the aftermath of the Council of Nicaea, Arianism did not go away, but managed to hang around due to political considerations in the Roman Empire. Fortunately, several church fathers rose up to defend the ideas of Nicaea. The most famous defender was Athanasius, who went on to become the senior pastor of the Alexandrian church. Thanks to Athanasius’s tireless work, which often put him at odds with the Roman emperors who preferred Arianism, the true view of the Trinity (Nicene Trinitarianism) finally triumphed. Several thinkers also extended the theology that had originally applied to the Father and Son to the Holy Spirit as well. The initial debate had centered on the question of Jesus’ relationship to the Father, but everyone knew you were supposed to baptize in the threefold name of Father, Son, and Spirit. (Matthew 28:19) After the original council in 325 AD, a more secure theology was put in place by the church fathers, so that the Holy Spirit was clearly included as divine. The upshot is this: each member of the Trinity is a distinct “person,” yet they share one “substance.” That is the mark of the true doctrine of the Trinity: 3 co-eternal persons, 1 shared substance. Don’t follow anybody who tries to teach you otherwise!

What does all this mean for us today? There are several big-time implications of the Trinity. First, we see that the full and complete deity of Christ is defended. As Athanasius so often insisted, our salvation is compromised if you accept the Arian premise that Christ isn’t fully God. Christ had to be one with the Father to provide perfect salvation, and one with mankind by becoming fully man. To save us, Jesus had to be 100% God and 100% Man. Athanasius was really clear about this point.

We also see in the doctrine of the Trinity that the Bible’s teaching is well-balanced. There are many verses that depict the Father, Son and Spirit as divine, yet we are never taught in Scripture to worship three separate gods. We worship ONE GOD who is a Trinity of persons. How exactly something can be three and one at the same time is a mystery to us; yet we speak this way because the Bible makes both points equally clear. God is both three and one. He is a Tri-Unity, according to Scripture.

There is one final implication of the Trinity I want to mention. Imagine a man locked in solitary confinement his whole life. He lives in a stark white cell. Not once does he ever have any interaction with another living being. My point is not to focus on the tragic life or psychological trauma such a person would have, but to ask the simple question, “Can this man truly love?” In our imaginary scenario, we would have to say no, because he has no object for his love. He has no relationship with anyone. He is solitary. He is utterly alone. There is no one to receive his affection and give it back in return. But God is not like this. His love is so full, so abundant, so profound, that Relationship is built into his very being! Even before he said, “Let there be light” and created a world with people for Him to love, the giving and receiving of love already existed within the Trinity. God is a Community of persons who love each other perfectly.

Do you see what this means? The Trinitarian God is not just the “boss of the world”; he is Eternal Love. The experience of a relationship between Father, Son and Spirit is fundamental to who God is. Love is his identity – and he shares it with us! This is the amazing teaching of Jesus’ High Priestly Prayer in John 17:21. Jesus prays that all Christians may be one, just as he and the Father are one. In other words, Jesus invites us into the Trinity’s community of love! Interpersonal love characterizes God’s own being for all eternity. We are called to participate in it – and to demonstrate it to a watching world in our own relationships.

The doctrine of the Trinity is not as complex as theologians make it out to be. Yes, it has some mysterious aspects, but its basic ideas are clear enough. The Bible teaches that God the Father, God the Son, and God the Holy Spirit are three distinct persons who love each other perfectly, forming one Trinity with a shared divine substance. The God of love invites us into his community, and he makes it possible for us to live in loving relationship with others so that the image of God can be seen in man.

This blog post was first published at the Living Proof Ministries blog in June 2009.