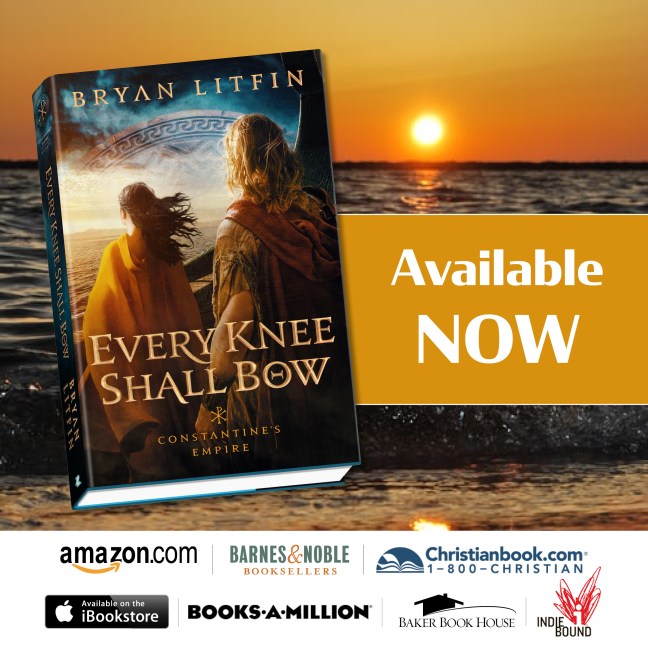 My latest book, Every Knee Shall Bow, released last month from Revell Books! It is Book 2 in Constantine’s Empire Trilogy, following The Conqueror. Visit my website to keep up with the latest news and book publications, both Christian fiction and non-fiction!

From the back cover:

The year is AD 316. Imperial persecution has officially ended. For the first time in history, the Roman emperor supports the church. But the fledgling faith’s future still hangs in the balance.

Flavia, a Roman senator’s daughter, is sent from her convent by Bishop Sylvester to seek Emperor Constantine’s permission to determine the canon of Scripture and build great churches where pagan temples once stood. But God’s enemies are on the move, and the path to the bishop’s goals is fraught with peril.

Flavia’s beloved protector, Germanic barbarian Brandulf Rex, has fought his way out of exile. He and Flavia will cross the empire by land and sea on this epic quest to free the Roman people from the tyranny of the ancient gods.

Will the early Christians receive the Word of God? Will beautiful churches rise in Rome where pagan temples once stood? Or will the world’s greatest empire keep refusing to bow the knee to its true and rightful Lord?

Intersection Column: Is a Novel Just for Escapism — Or Something More?

Book Spotlight (and a Giveaway!): Every Knee Shall Bow by Bryan Litfin

2 thoughts on “Every Knee Shall Bow – New Book Release”