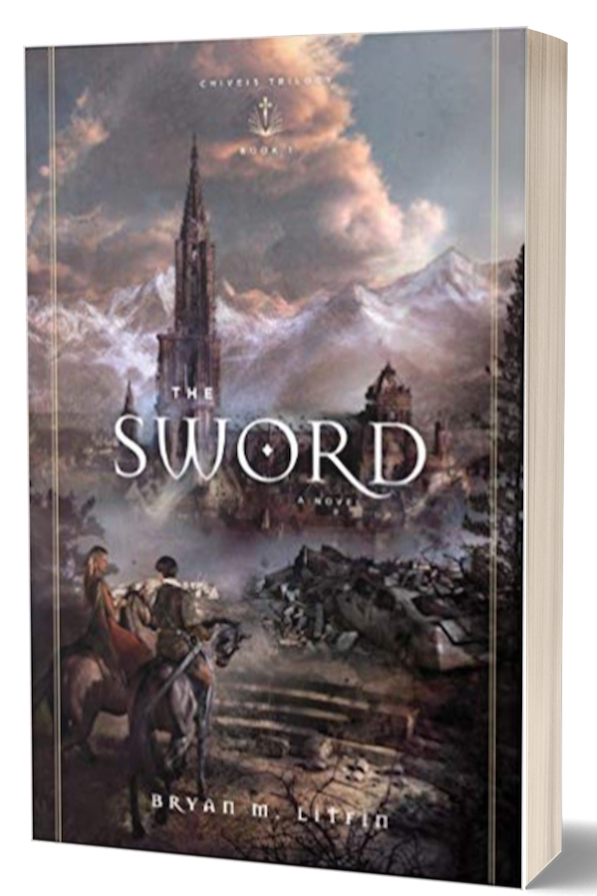 Book One in the Chiveis Trilogy:

Four hundred years after a deadly virus and nuclear war destroyed the modern world, a new and noble civilization emerges. In this kingdom, called Chiveis, snowcapped mountains provide protection, and fields and livestock provide food. The people live medieval-style lives, with almost no knowledge of the “ancient” world. Safe in their natural stronghold, the Chiveisi have everything they need, even their own religion. Christianity has been forgotten—until a young army scout comes across a strange book.

“Theologian and scholar Bryan Litfin has accomplished a rare feat—he has fashioned a land and time unique to any reader’s experience.”
—Jerry B. Jenkins, author, The Left Behind Series

“Some fiction is mere entertainment and some fiction is like a mirror in which we see ourselves and our world reflected in challenging and instructive ways. The Sword is a mirror of who we are at the core and what we struggle with in our non-fiction lives. Don’t miss this one. It is a compelling read that is well beyond mere entertainment.”
—Joseph M. Stowell, President, Cornerstone University

“Ever wonder about a world with an ‘almost-absence’ of God? Theologian turned ‘futurist’ Bryan Litfin provides us a compelling tale of the endurance of God’s amazing love—even to a distant remnant. Get your mind around The Sword. It could be the start of something big.”
—Mark Elfstrand, Host of “Let’s Talk with Mark Elfstrand,” AM1160

“Pulling us into the future to reveal the past, Bryan Litfin’s great what-if story discovers instead what is, laying bare the tendencies of the human soul, the strategies of our adversary, and the gentle sovereignty of the eternal God. In The Sword discovering truth is as exciting as discovering love, for, as Litfin skillfully portrays, they are one and the same.”
—Amy Rachel Peterson, author, Perpetua: A Bride, A Martyr, A Passion